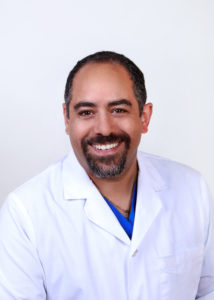 Michael E. Khalil, D.D.S. is our Endodontist. Dr. Khalil graduated from California State Polytechnic University with a Bachelor of Science in Biology in 1992. He attended the University Of Southern California School Of Dentistry and graduated in 1996 with a D.D.S. degree. He continued at U.S.C. with his Specialty Degree in Advanced Endodontics in 1998. He served as an instructor at U.S.C. from 1996 to 1999 and was appointed as the endodontist for the U.S.C. Faculty Practice. He was the recipient of the American Association of Endodontists National Achievement Award in 1998. Dr. Khalil’s special interests include telling jokes, camping, cars, and rough housing with his three children. He has practiced throughout Southern California and has expressed his admiration for our facility and the hard working team that makes it run so well.